Graduating classes, or, will the humanities play in Peoria? 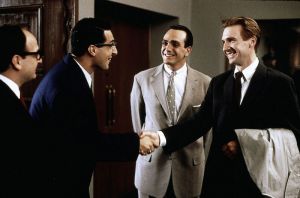 Dear readers, Hello! It’s wonderful to have so many new followers and visitors, thanks to the link on “Freshly Pressed.” I do try to answer your comments, so keep writing in. If you’re new to the site, I recommend the greatest hits page. It’s particularly fun to read the ones I wrote before I started using my real name. Oh, and one other thing. Here at The Kugelmass Episodes, we play your requests.

“Will it play in Peoria?” is a figure of speech that is traditionally used to ask whether a given product, person, promotional theme, or event will appeal to mainstream (also called “Main Street”) America, or across a broad range of demographic and psychographic groups. -Wikipedia

A short while ago, I wrote this post, responding to Nicholas Bourbaki’s excellent posts defending the humanities, which are embattled, and have been for a while now. Bourbaki has since responded, here. It’s a great post, and I concede the point about “thick description,” which is really only an “interdisciplinary” practice where other disciplines have adopted a literary style. My friend Sherwin Siy — whom you may remember from the ongoing “Contradisciplinary” series we’re doing — tweeted at me in response to my post:

This sidesteps the need to justify the humanities as a field of study; it may not mollify an administrator w/ a budget axe.

Bourbaki, a week later and (probably) without reading Siy, wrote this:

My defenses of the humanities were designed not for committed humanists and humanities scholars, but for a hypothetical audience of open-minded, educated non-humanists with the power to make decisions about universities, or the ability to influence those with power. I don’t expect that any university administrators or board members will ever actually read this blog, when they could be watching a TED talk, skimming the FT, or browsing the Harvard Business Review website (including articles such as: “One Reason Cross-Cultural Small Talk Is So Tricky” and “What Makes a Leader?”). But I continue to think that defenders of the humanities need to do a better job of offering reasons that the humanities are valuable — reasons that might persuade someone who has power and is currently agnostic on the value of the humanities, or is sympathetic but doesn’t know how to justify his sympathies to others.

Bourbaki’s nuances are important here: he’s not writing exclusively for an audience of university administrators, and he’s realistic about the reach of his claims. I support this project too much to object strongly, yet I feel that university administrators are not the source of the crisis. They’re just delivering the bad news. University trustees and presidents do not base their “business decisions” exclusively on what students do, after graduating, with their degrees. They also study, and try to predict, what students want to learn. After all, the “products” that universities offer are classes, which a student can take for any reason in the world. Creative writing classes do not produce millionaires, but they are on the rise, because there’s high demand for them.

(It’s also worth noting that the very term “cross-cultural” is a piece of humanities jargon, referencing modern discussions about heritage, diversity, and tolerance. The topic is not the point of the article. That is a pretext. The article exists to flatter the reader for comprehending, right away, what the title means. I will say more about this later on.)

Unfortunately, the crisis in the humanities is not a crisis of administration. Were that the cause, it would be much quicker and easier to solve. It is, first of all, a symptom of economic crisis. Students anxious about their economic prospects are reluctant to take “useless” classes. In a nation where a university education is increasingly necessary, yet where wages and benefits continue to decline, it is inevitable that there will be a lot of cynical college students who are (rightfully) pessimistic about their future careers. A creative writing class makes sense: you’re already paying for school, why not get some pleasure out of it? It’s one elective. Majoring in English, however, is a whole other ballgame. It’s therefore quite relevant to turn from the humanities to economics, as Bourbaki and I will do next.

The humanities themselves are also to blame. I’ve already written about this at length in “Look Back In Anger: On The Death of Literary Studies,” and in “Why English Will Die,” and stand by those posts.

If I did come face-to-face with a university administrator, and had to defend the humanities to him, I would say this: the humanities are, and have always been, of great interest and value to the rich. Harvard’s Department of Philosophy is not in danger, after all. At the best private high schools in the country, English has the high profile it deserves, and students may take classes in Greek and Latin. These are the facts, and up to a point, they are genuinely heartening. The significance of such regard for the humanities extends far beyond the Ivy League. Anyone who knows a prosperous, thriving family, knows that books matter around that dinner table. So do films, and plays, and music. In “The Talented Mr. Student,” I criticized using literature to “pass” as privileged. Well, that is an extreme and unrealistic goal. On the other hand, ignoring the humanities is vulgar, and perfectly conspicuous. That is my defense of the humanities, Mr. Administrator! You can’t downsize them without creating a glass ceiling for your students.

Imaginary persons are like real persons; some of them are ominous. That is certainly the case with this hypothetical trustee. I’d rank him with the imaginary multitudes who learned something from Avatar. I am growing anxious now, remembering Mr. Administrator’s hunted eyes. Everything is an apology with him: “of course, it would be wonderful to preserve our current offerings, if doing so was only affordable, for a modest institution such as ours…” When he smiles, which he tends to do suddenly, his cheeks form hard little balls. I chat with Mr. Administrator as rarely as possible — it is exasperating when he does not agree with me — and it is horrifying when he does.

← Moral choices and foreign languages
Beauty and the Beasts: On the beginning of Dante →

2 thoughts on “Graduating classes, or, will the humanities play in Peoria?”