In Which I Demonstrate Sagacity In All Religious Matters 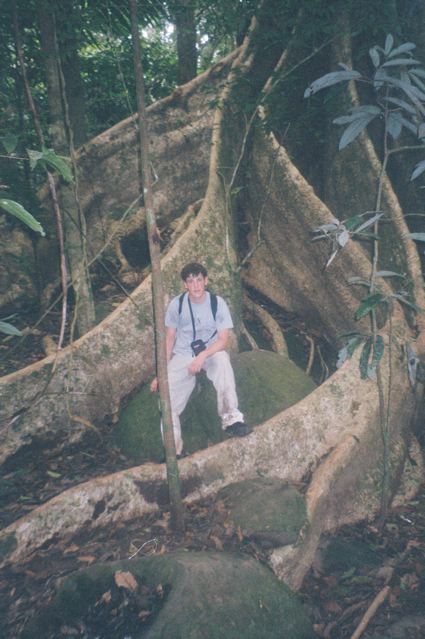 You can’t see it, but in my backpack there is a copy of Lonely Planet: Thailand, which I have sort of read cover to cover during my bus rides around Thailand. This is in Northern Thailand, near Chiang Mai. Prior to my arrival, I have also read a B. Dalton booksellers edition of Essential Buddhist Writings: Now With More Dhammapada, and have attempted, at various times, and in various ways, to meditate. I am on a tour of the rainforest with my friend NB, and one of the park rangers, Sam. This is in December, 2001. I’ve eaten next to nothing, and my clothes are not wicking moisture away as much as one would hope, or as much as they seemed to on that fateful day in REI.

SAM: There are all kinds of useful plants that you can find in a rainforest. (snaps off part of a thin, leafy, brilliantly colored plant) This one, for example, I chew when I have a headache. And this one, over here, you eat when you want divine power with women. You know? An aphrodisiac? Divine power from the gods; Buddha blessing.

NB: Do they allow you to collect all this from the forest? Do people still live here?

SAM: Well, people used to. Rebels, actually, would camp out in the parks. It’s very hard to catch them in the forest.

ME: Does the divine power come from the Buddha?

SAM: No, from other gods. The Buddha works with them.

ME: So you believe in all these other gods, and the Buddha?

SAM: The Buddha for important things. Buddha’s blessing on the other things.

NB: Do they teach this to all the park rangers?

SAM: No, I’m only telling you, specially. We’re not actually supposed to give tours. That’s why I’m telling you these secrets.

(We take pictures in front of the enormous tree.)

NB: What did you do before you worked as a ranger?

SAM: Well, I was living in a monastery for many years.

ME: You see, NB, this is an important part of the culture. A lot of the people live in monasteries for a certain period of time as young adults, in order to gain some spiritual perspective on the world—

ME: —and they then return to the world, having had their experience of ascetic, religious life. It’s almost a rite of passage into adulthood. Is that what it was like for you, Sam?

SAM: No, I was doing business before, which I liked.

NB: Why did you decide to go into the monastery?

SAM: Because I was working with this man, and then we started to have some very serious business problems. The man I was working for was trying to kill me.

ME (eventually): What made you decide to leave the monastery and become a ranger?

SAM: That man got run over by a car.

NB: Did you say over eighty species of songbirds?

← Getting Lincoln Wrong: Ann Althouse, The New York Times, and the American Student
Here at The Kugelmass Episodes… →